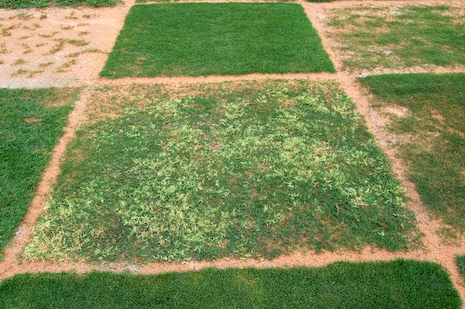 There is a disease that occurs at Hong Kong and in other parts of South and Southeast Asia that is the most unsightly pathogen I have seen.1 I refer to bermudagrass white leaf, and typical symptoms are shown below on a bermudagrass fairway at Hanoi. Bermudagrass white leaf does not affect the playing quality of the turf, but it sure disturbs an otherwise visually consistent turf.

I call this a disease only because the Compendium of Turfgrass Diseases lists it as a mollicute disease. But it is not a fungus, and cannot be controlled with any pesticide. The only way to get rid of it is to physically remove the infected plants. That is the bad news.

Once you have this bermudagrass white leaf in your turf, you can expect to have entire plants that lose chlorophyll and turn yellow or white and then eventually die. In studies conducted at the Asian Turfgrass Center in 2007 and 2008, we determined that infected plants usually die from four to twelve weeks after symptoms appear. The symptoms are caused by a phytoplasma and that phytoplasma is transferred from plant to plant by insect vectors such as leafhoppers.

We grew varieties such as Tifsport, common, Savannah, Riviera, Tifway, Tifgreen, Mountain Green, and Tifdwarf, among others, all grown under the same conditions in adjacent plots. What we noticed, and measured, was that certain varieties seem especially susceptible to bermudagrass white leaf infection. At a time when Tifway and Tifsport and Mountain Green had less than 10% infection, varieties such as common, Savannah, and Riviera had more than 60% infection.

In the photo above, plots maintained as fairway at Asian Turfgrass Center’s research facility near Bangkok showed different susceptibility to bermudagrass white leaf.

My advice about managing bermudagrass white leaf is to choose a variety that has less tendency to become infected (such as Mountain Green, Tifsport, or Tifway), perform cultural practices to encourage healthy bermudagrass and the white leaf will eventually go away, and do not buy stolons or sod from a nursery where this pathogen is present.