Flights and favorite turf photos of 2017

As I say at the end of every year, it has been another extraordinary year for studying grass around the world. See these links for some of my favorite photos (and flight maps) from 2015 and 2016.

I scrolled through my photos from this year and selected these ones. Here they are, in chronological order. 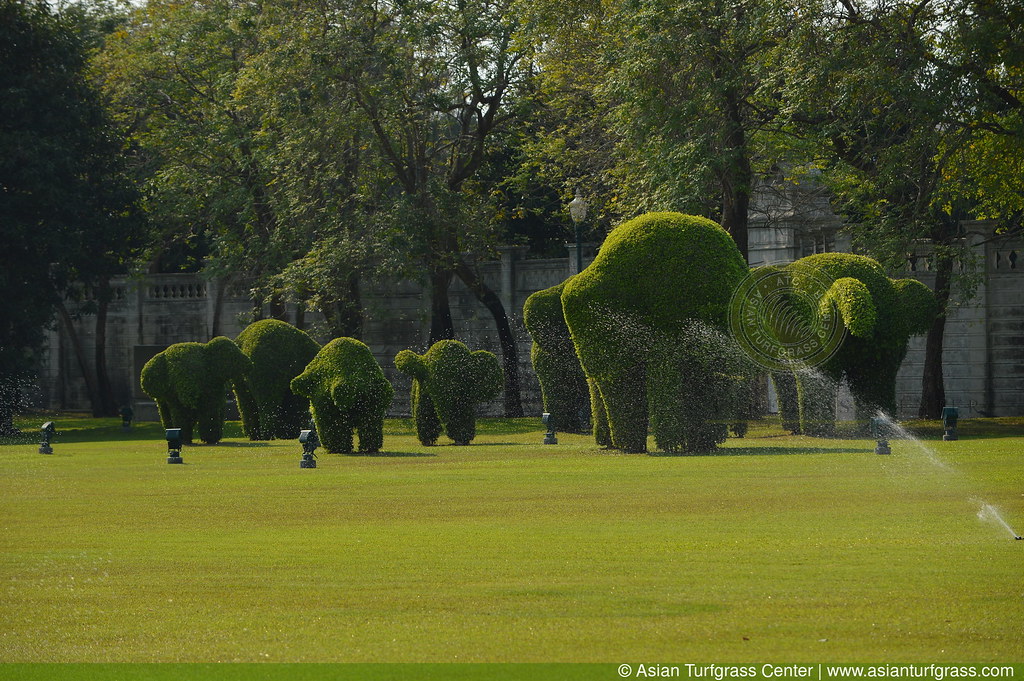 January: A lawn of nuwan noi manilagrass and javagrass and elephants in central Thailand. 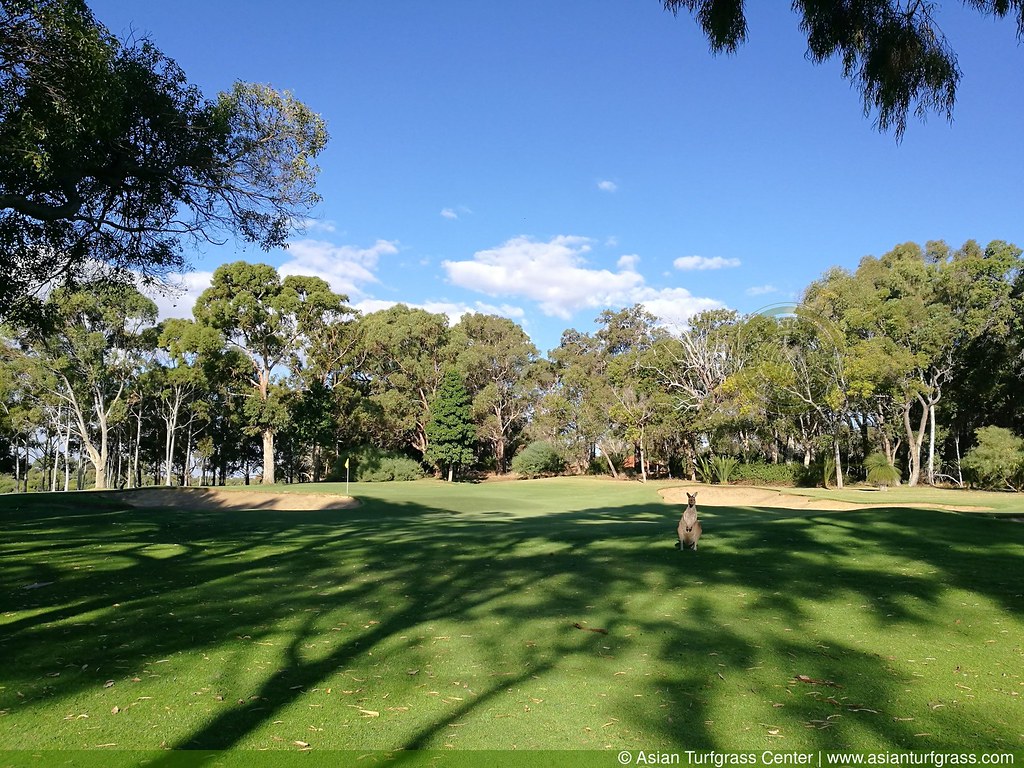 May: I went to Australia for my second time this year, and it is still a novelty for me to see kangaroos. It gets really hot in Australia, and I’ve recently been studying the temperatures to get a better understanding of how much heat stress the cool-season grasses experience. 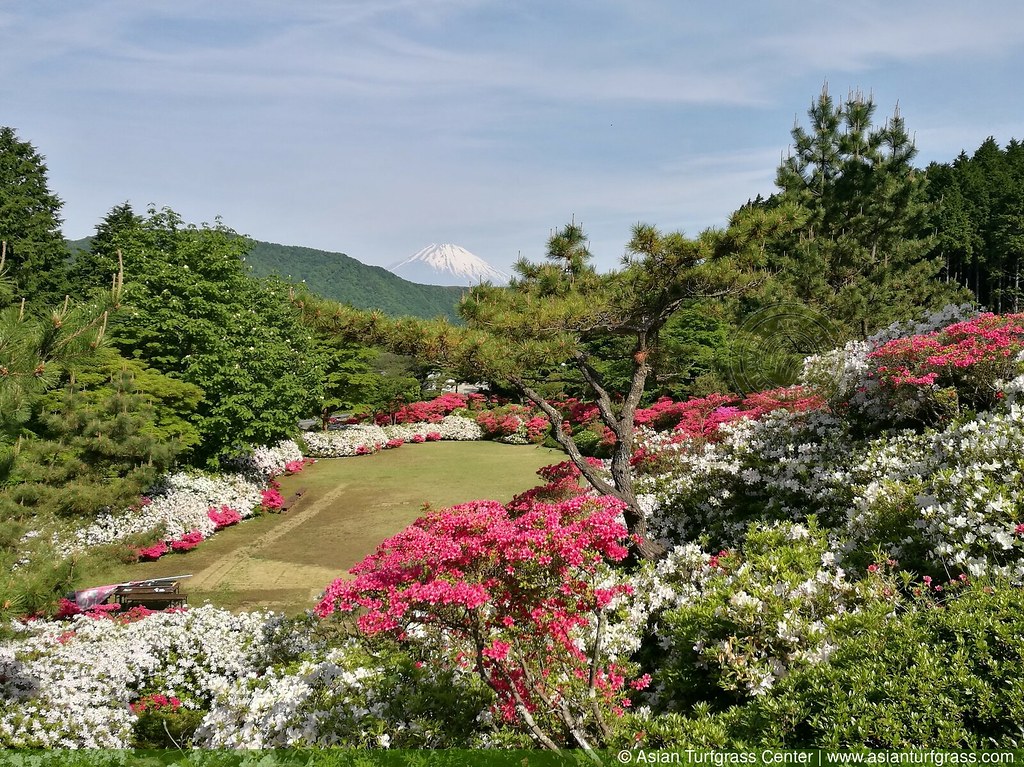 May: A noshiba lawn with Mt. Fuji in the background, from Hakone. This lawn was just starting to grow, but the azaleas were in full bloom. I only had my phone with me, and it takes photos with such a wide angle that Mt. Fuji appears far away. In reality, Mt. Fuji towers over this scene. 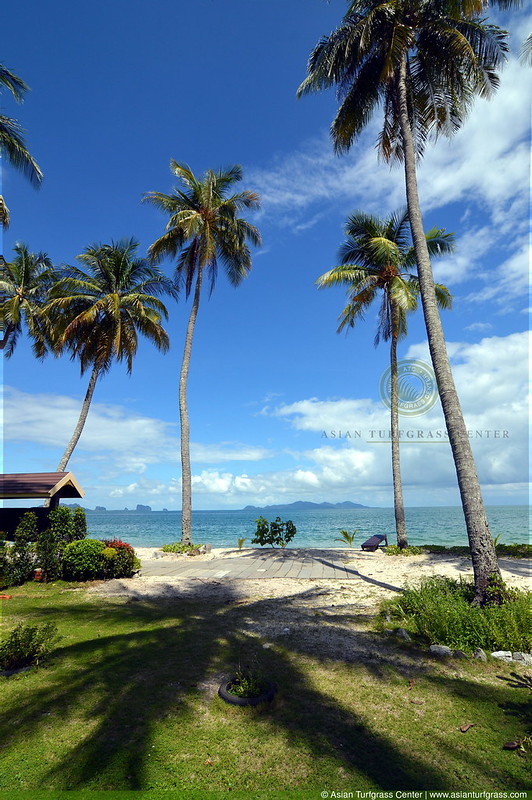 June: Manilagrass beside the beach at Ko Muk in southern Thailand. 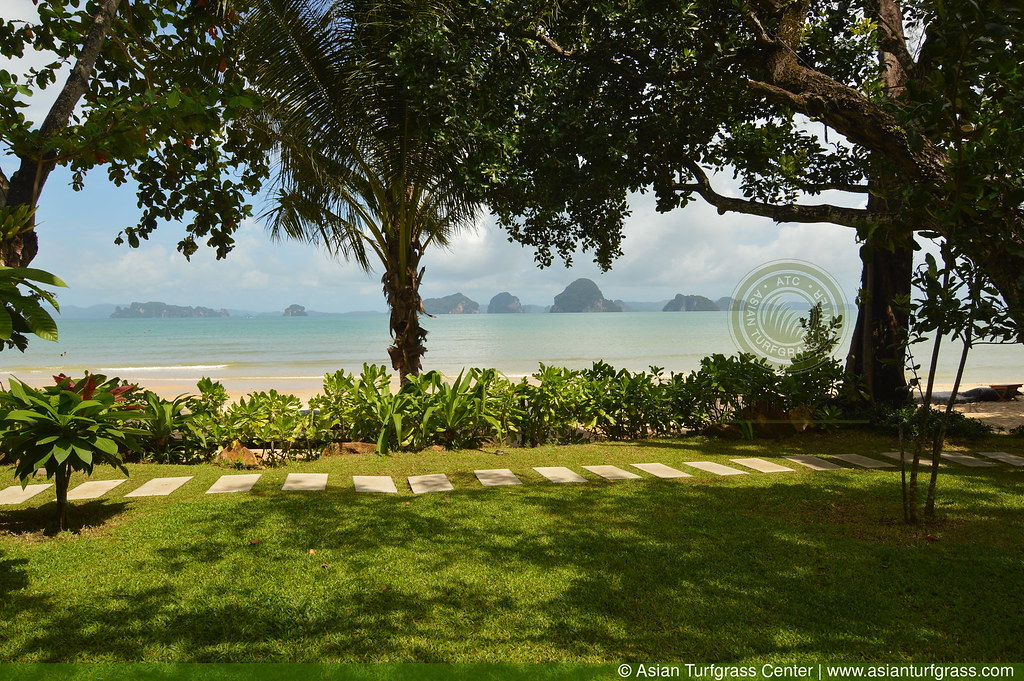 July: A tropical carpetgrass lawn in Krabi. This grass thrives in the shade. 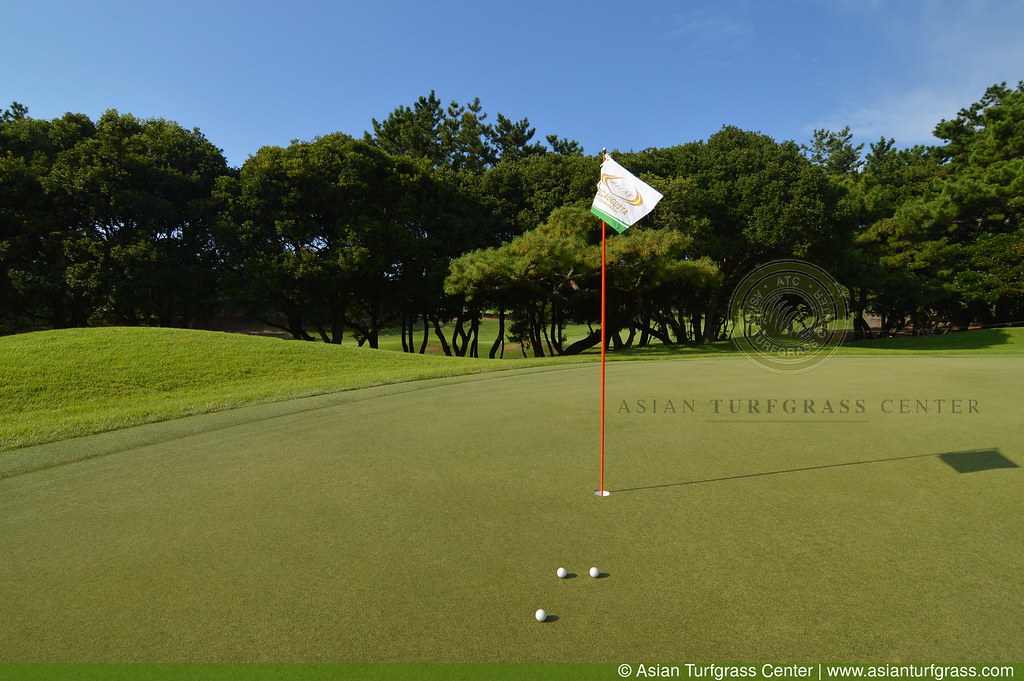 August: I went to Keya GC again for the KBC Augusta tournament in August. The korai greens were again in superb condition. I’ve been collecting surface performance data at this tournament each year since 2013. What really impressed me this year was the firmness of the greens. The greens were only topdressed twice in 2017. And the surfaces were firmer this year than they had been in any of the previous tournaments. 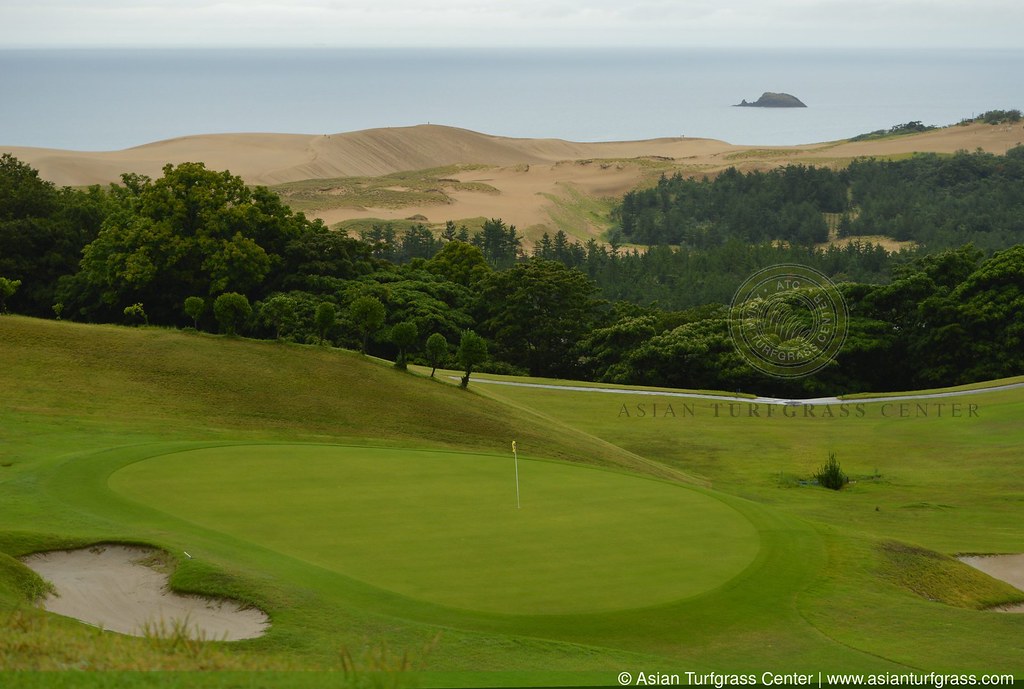 September: A korai green at Tottori Golf Club. I’ve been wanting to visit this course for many years, and I finally had a chance this September. This nine hole course is expertly-maintained with a crew of 3 people. 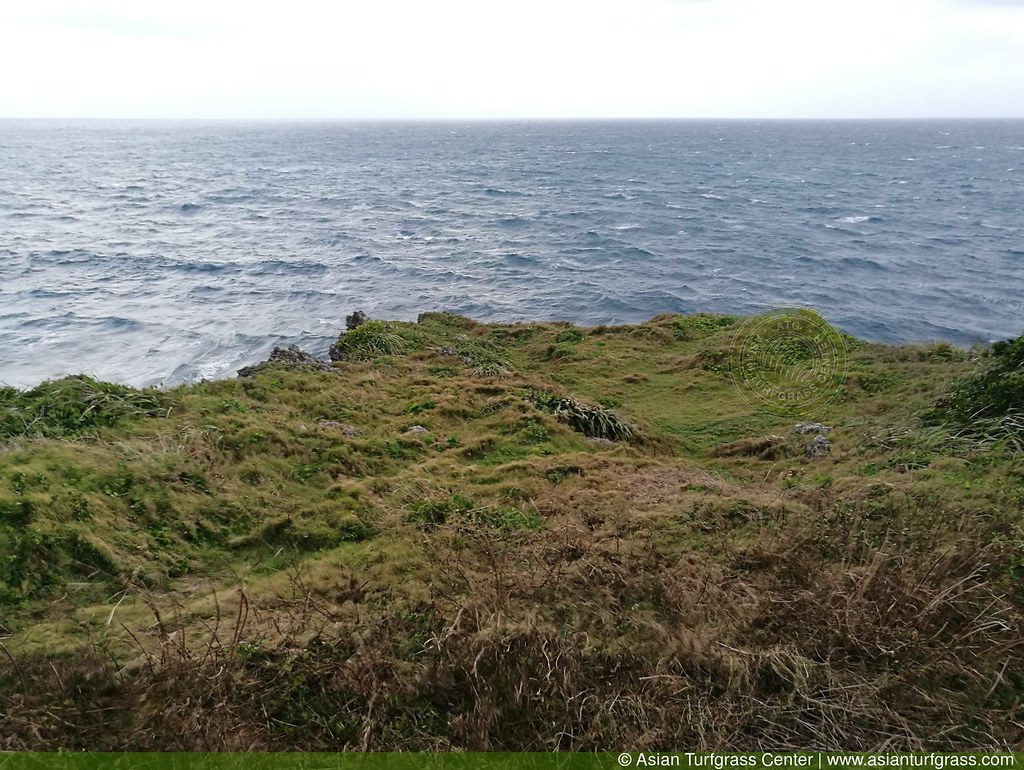 October: Korai grassland in Okinawa. I went for a morning run and came to an expansive and wind-swept korai grassland at Manzamo. 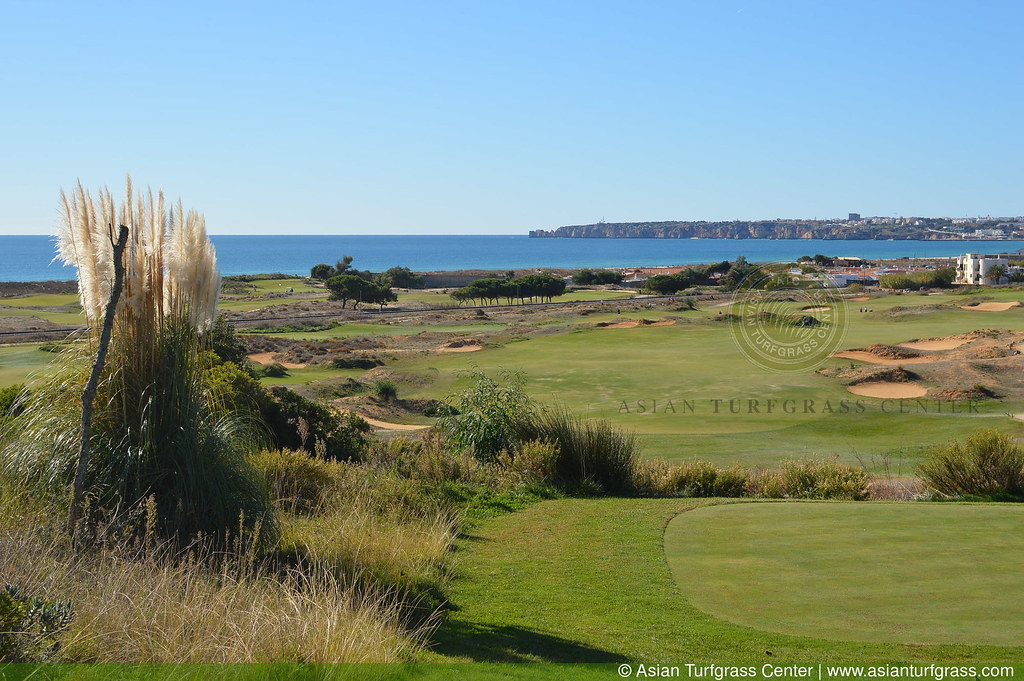 November: I visited a number of courses in the Algarve. This is the Onyria Palmares Beach and Golf Resort in Lagos. And these fairways are mown less than 30 times a year. In 2016 the fairways were mown 27 times; from 1 January to 31 October 2017 the fairways had been mown 19 times. The turf on these fairways is in excellent condition and produces a great playing surface. With such infrequent mowing, the CO2 emissions associated with fairway mowing are small compared to locations that mow fairways more frequently.

I’ve calculated that mowing fairways 12 ha (30 acres) in area, which is a typical area for 18 holes of fairways, will produce 97 kg of CO2 emissions from the diesel burned by the mower. Round that to 100 kg, and we see that mowing fairways 10 times will produce about a ton of CO2. A course that mows fairways 60 times a year will produce about 3 tons more CO2 than one mowing 30 times a year. These data are useful when considering grass selection for new projects or renovations, and also for comparing efficiency of maintenance at the same location year to year. 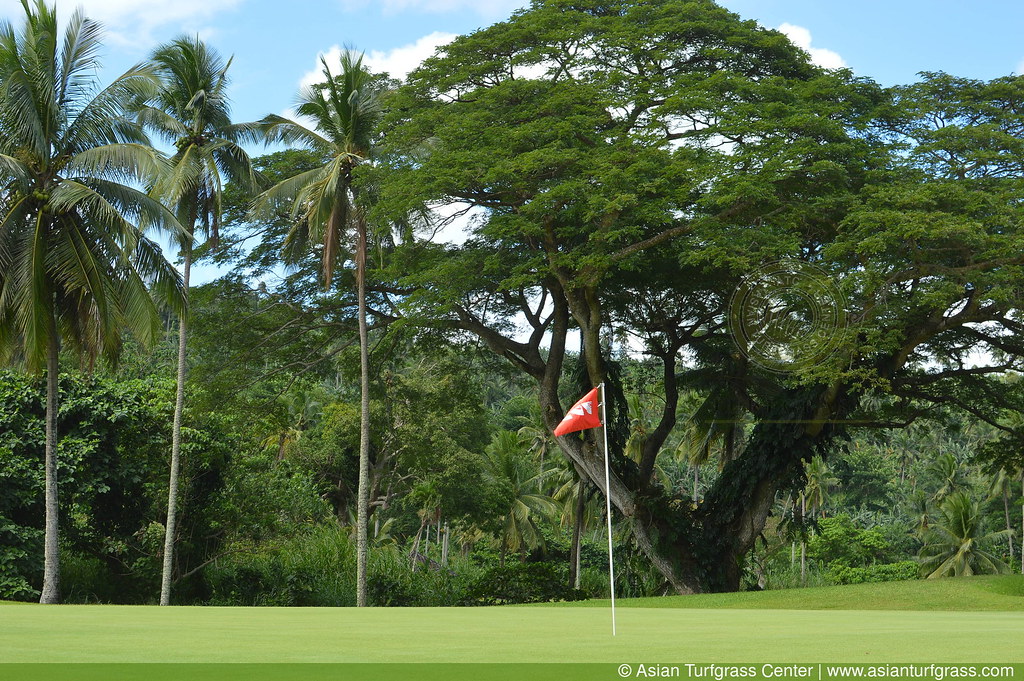 November: A korai green at Canlubang, Laguna, Philippines. I’ve been to the courses around Canlubang but hadn’t been to this property until last month. If I remember correctly – I checked my notes and didn’t write this down – the course was opened in 1978 with bermudagrass greens, and they were changed to korai the next year. This is a beautiful 36 hole property with the typical rolling and ravine-filled landscape of all the courses in Cavite and Laguna on the north side of the Taal Volcano.