This is an interesting story about a common grass that rarely appears in a lawn as just a single species – as a monostand. But at an especially high profile location in Bangkok, the lawns are almost pure javagrass (Polytrias indica). The Grand Palace is the only place I’ve seen this grass maintained as a single species lawn.

It is more typical in central Thailand to find javagrass in patches as part of a manilagrass (Zoysia matrella) sward. For example, at the western entrance to the hedge maze in Rama IX Park in Bangkok, there are patches of javagrass in a lawn of manilagrass. 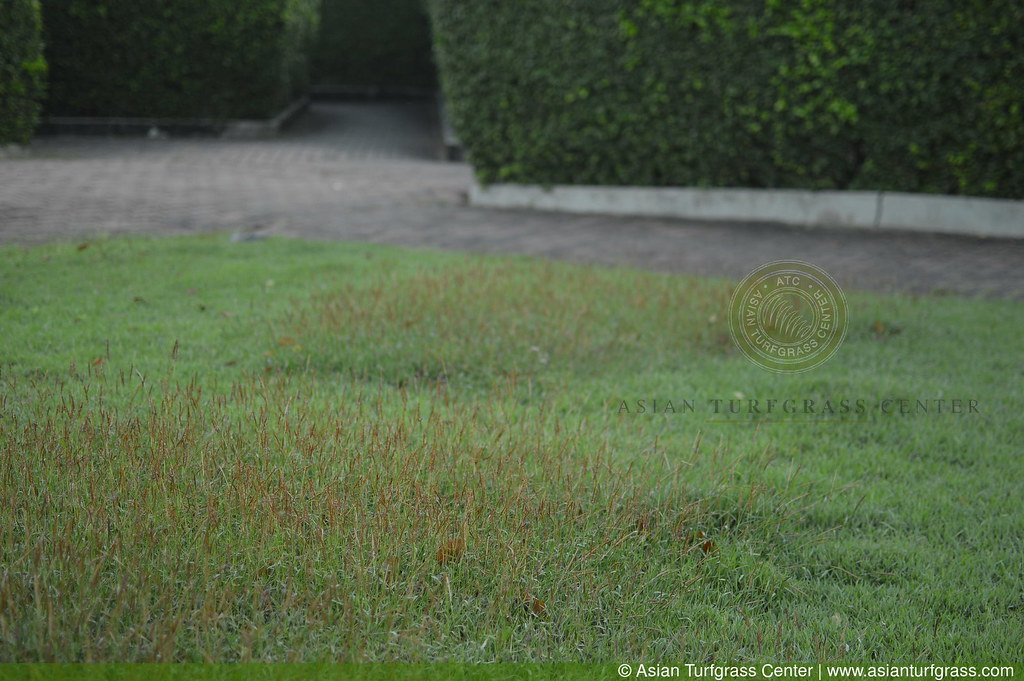 The javagrass inflorescence is distinctive. Piper wrote that “the flowers are in dense spikes of a brownish purple color.” What I’ve observed in central Thailand is plenty of flowers on unirrigated or lightly irrigated turf during the dry season, and generally no flowers during the rainy season or when plenty of irrigation is applied.

The Kew Grassbase entry for Polytrias indica says it is “Perennial; mat forming. Culms prostrate; 10–30 cm long; rooting from lower nodes.” This is how most turfgrasses are described, as perennial and mat forming. The Grassbase entry says “Leaf-blades lanceolate; 2–5 cm long; 2–5 mm wide.”

There are more patches of javagrass in other lawns. From a distance I notice a russet color of the javagrass patches in this primarily manilagrass lawn at the Bang Pa-In Royal Palace.

“This grass forms the natural covering of lawns and parks on the heavy soils of western Java, making a pure turf in which few weeds appear,” Piper wrote, in Golf course grasses in tropical and subtropical regions. “It is a low-growing grass … The turf is very dense, but is inclined to be a little loose like short-mowed crab grass.” I’ve noticed that the leaves are softer than other common turfgrasses in Thailand, and I expect that this characteristic, and the green color when supplied with irrigation, are a primary reason for the use of this species on the palace lawns. 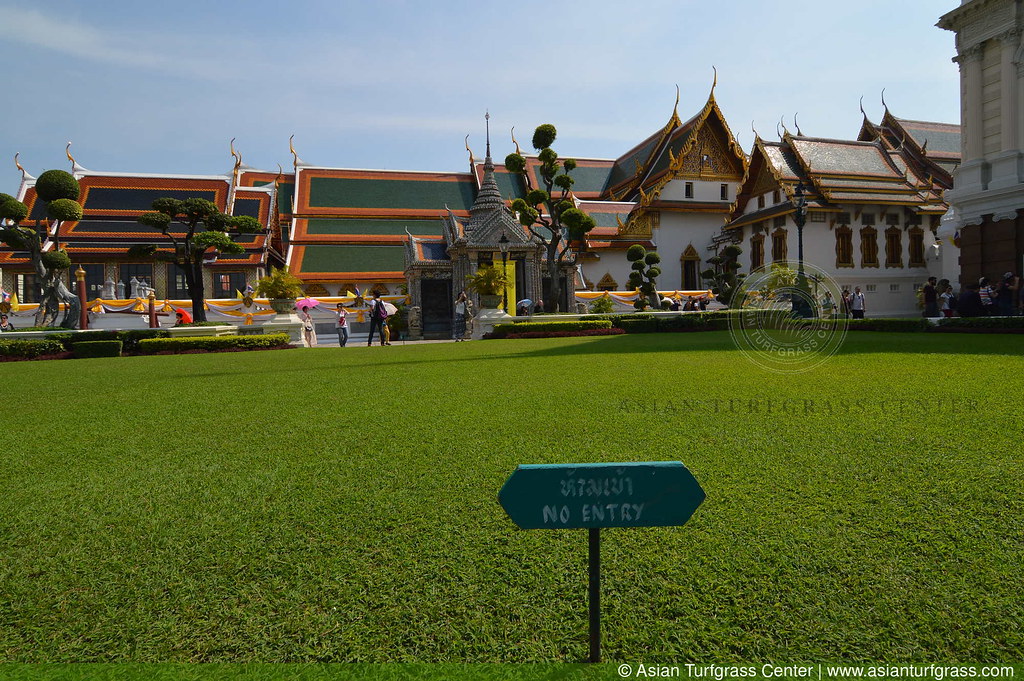 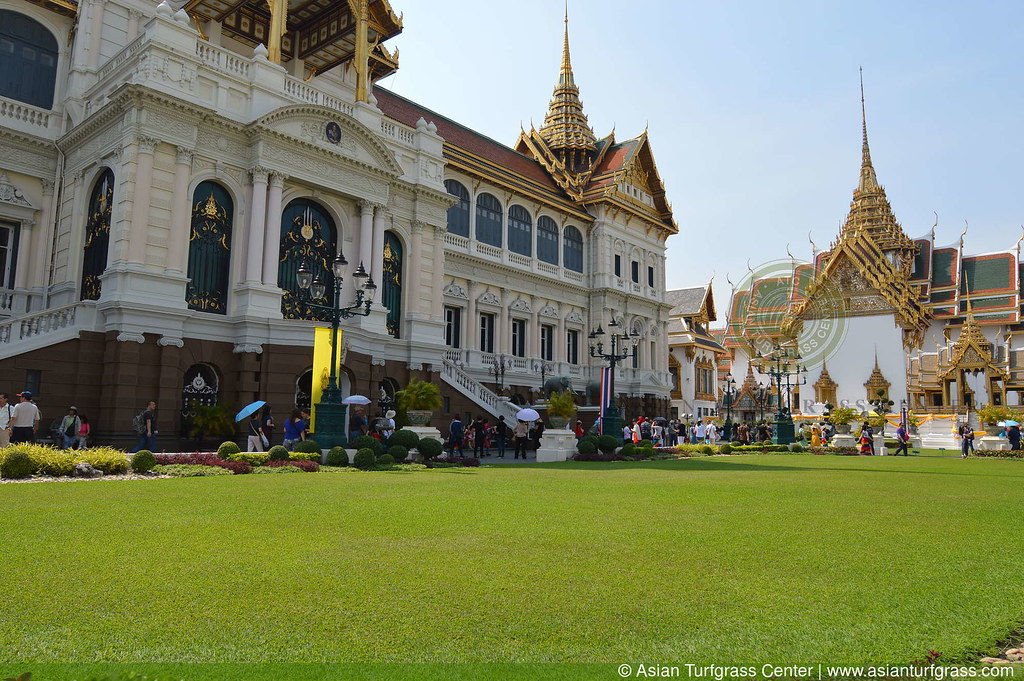 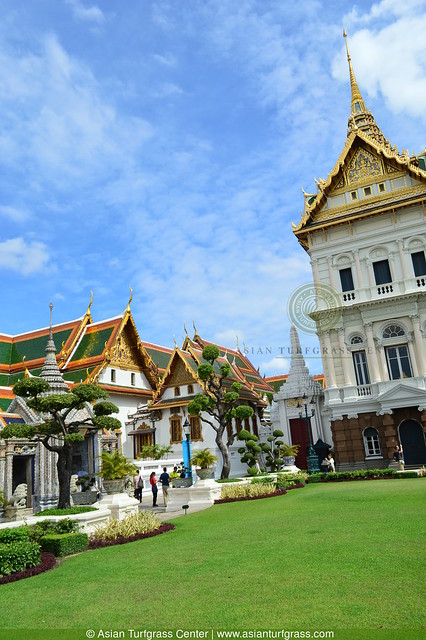 The more typical appearance of javagrass is as one can find it at the Plutaluang Royal Thai Navy Golf Course in Chonburi. This is a manilagrass green surrounded by a lot of javagrass. Here during the dry season it has the russet – reddish brown – color I mentioned, and plenty of “flowers in dense spikes” as Piper described. 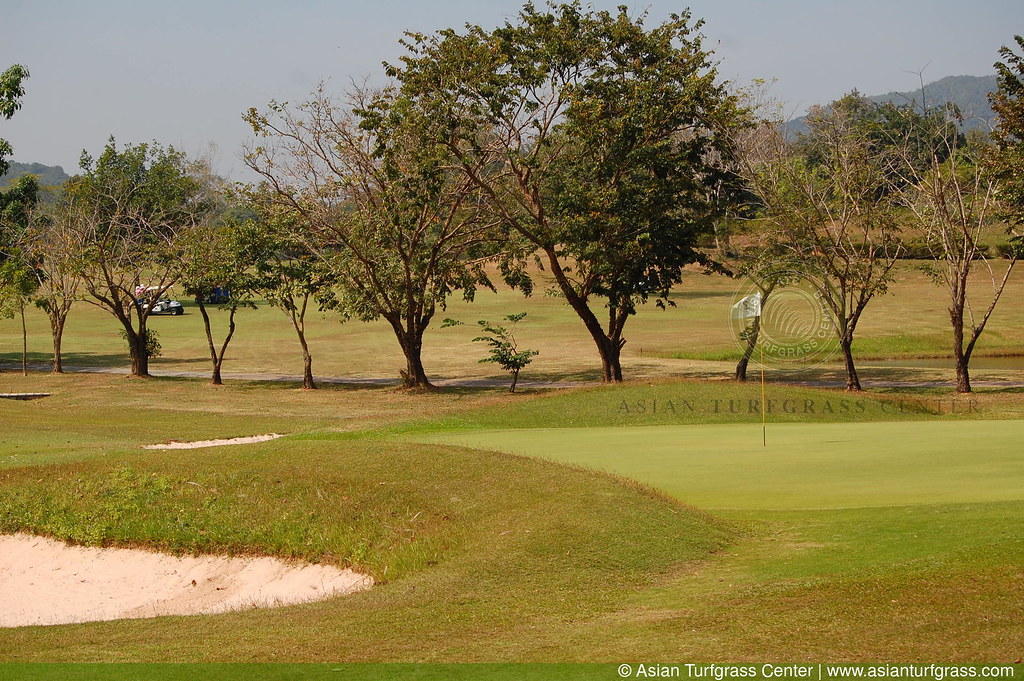 It doesn’t look at all like this when irrigated or during the rainy season. In those cases it takes on an appearance like the Grand Palace lawns.